Everyone has some psychic ability. Have you ever been in a room full of people then felt like someone is staring at you, then you look up and meet someone’s gaze? That’s ESP. How about when you have a dream that comes true? That’s precognitive dreaming. How about when you choose a different path only to find out later that there was an accident on the path you usually take? Again, ESP.

I was born a strong psychic, and utilize it every day. Sometimes I have to ‘turn it off’ or I get overwhelmed when in a crowd. I’m empathic and ‘feel’ other’s energy. It can be a lot of fun, but sometimes it can make you uncomfortable.

I recently read a woman’s palm while having coffee, just because I ‘felt’ it was necessary. Needless to say, she was amazed, and I was pleased to help. Palm reading is also fun. The lines on your hands change as you get older. I study things like that on a regular basis. Learning new things is important for a psychic. Even the psychic that I go to brings something new to the table each year I see her. I don’t read for myself because I can’t be unbiased. It’s all about how I look at my life and decipher the cards.

Have you ever been to  a psychic? I write romance novels and my characters have strong abilities. It’s a ton of fun to create characters who can see the world in a different way that we do in ‘real’ life. I hope you get to read them at http://www.paranovelgirl.com or you can look me up on Amazon.com or Amazon.ca.

A Kiss is a KISS.

Can you tell what a person is like from his kiss?

Brett is a stranger, yet he steals a kiss from Lana. Now she has to decide whether to love him/her or hate him/her. Love and hate share a fine line, so is it okay for a guy to be a thief?

I recall the first kiss I gave my husband so many years ago. He sighed, and told me I was a good kisser, and I wanted more, but he was a perfect gentleman, and said goodnight. Then I had to wait hours to talk to him, practically pacing the floor. We’ve been together ever since, and will have our 36th wedding anniversary this summer. Judging by his kiss, I fell under his spell.

Enjoy this excerpt from Authors Beware, and you’ll see what I mean. What do you think of a stolen kiss? Would it make you angry, or stir your libido so deeply that you can’t stop thinking about him/her? 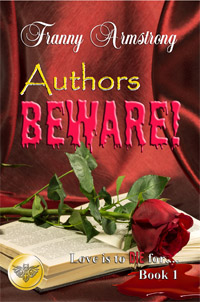 Brett knew someone tailed him. He’d been trying to shake the guy for a few blocks, but the man seemed relentless. Entering the lobby of Belleview towers, he glanced around, and saw an attractive woman waiting for the elevators near the back wall. She stood apart from the others around her, drawing him toward her like a magnet. He’d figured out a way to elude his tail, and hoped she would go along with it.
She’s really hot! She seems like a fun-loving girl. I hope she’s game.
After taking another glance outside, he saw the man coming up to the revolving doors. Moving quickly over to where the woman stood, he gave his plan a shot.
Nodding politely to her, he stripped off his jacket, rolled it into a ball, and threw it on the floor beside the potted fern.
“Excuse me, ma’am, but I’m in trouble, and I wondered if you could help me out?” He pulled his baseball hat from his back pocket, and put it on backwards.
Curiosity filled her gaze before she nodded. “Well, sure. If I can—.”
Before she could finish her reply, he swept her up in his arms, and kissed her passionately. The woman seemed so stunned she didn’t react to his audacity, melting into his arms instead of fighting him. Her hands rested on his chest, fingers tangled in his shirt
Distracted by the sexy woman in his arms, Brett found it hard to keep a close eye on his stalker, amazed at the passion the woman returned, nearly knocking him off his feet. Boy, she can light my fire anytime! Minutes may have ticked by, but he lost count, losing himself in her sensual mouth.
After the tail finally gave up and left, Brett continued the kiss, unable to stop. His pants suddenly became uncomfortably tight. Pulling her closer into his embrace, he nearly groaned as her body brushed up against him. She’d turned to liquid in his arms, sending shivers of desire up his spine. She smelled like lavender and fresh air.
He finally lifted his head, and stared into her eyes. Her expression dazed, she stared at him with a bemused gaze.
The elevator doors opened with a loud ‘ding’. Regretfully, he let her go.
“Thank you, ma’am. You were very helpful.” His voice low and husky, he watched her as he bent down, and picked up his jacket.
“Well, goodbye…” He started to say his farewell, but studied her swollen, damp lips, and changed his mind.
“Ah, what the hell,” he said, and kissed her again, a short, lip-smacking kiss. Then he nodded before he stepped into the elevator, and the doors closed on his grinning face.

Get some of the books for FREE while others are marked down to 50% OFF!

http://www.SMASHWORDS.com for details. Just go to: https://www.smashwords.com/books/category/1/newest/1) on SUNDAY…